On 11 November 2016, the Valltorta-Gassulla Culture Park was declared a listed monument by the Generalitat Valenciana. This declaration was the culmination of a protracted process that began with the discovery of four caves – Cavalls, Civil, Mas d'en Josep and Saltadora – in 1917 followed by Cova Remigia and Cingle in Gassulla in 1934. 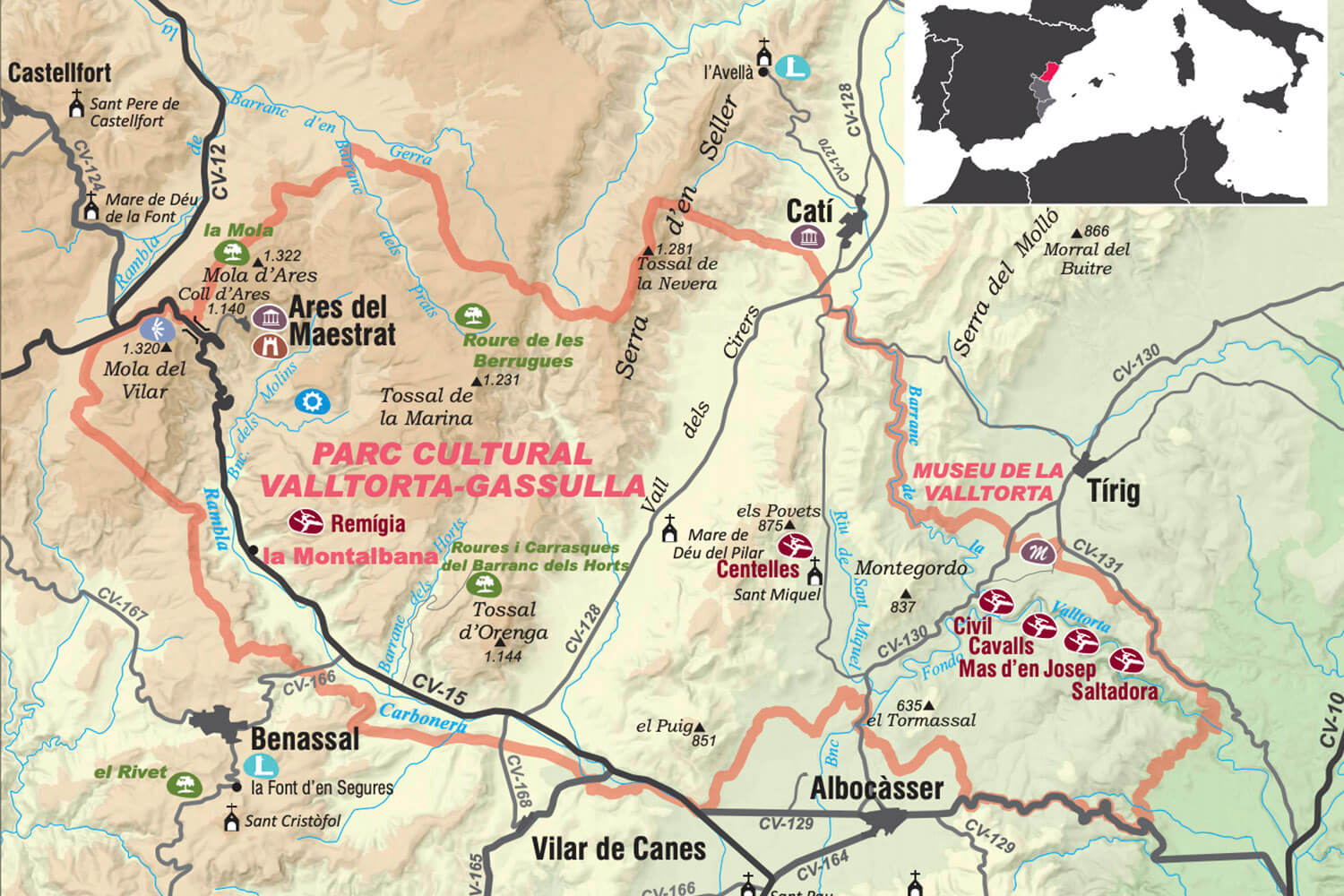 There are 22 caves and rock shelters containing cave paintings in the borough of Albocàsser but only the Centelles rock shelter is open to the public (by appointment only).


The old town centre still has interesting buildings such as the parish church and the tower – all that remains of the old castle that dominated the city until it was demolished in the early 20th century.


There are several chapels in the town and borough: Sants Joans (14th C.), Sant Pere Màrtir (15th C.), L'Esperança (15th C.), Sant Miquel (16th C.) and particularly the Sant Pau chapel and inn that began to be built in the 16th century and was enlarged in the 18th century.


Buildings worth a visit in the surrounding borough include the Regatxol ice pit for storing snow after the heavy snowfalls of times gone by; the fortified farms of Torre Beltrans and Montalbana; and the extraordinary cluster of water mills in the Molins ravine, a listed monument.
The most surprising feature, however, is the extraordinary dry-stone walling found throughout the borough.

Benassal is home to just two caves in the culture park, neither open to the public, but there is plenty of rock art at sites outside the park which are not yet open to be public.
The historic town centre has large stretches of its medieval walls with square and round towers, including particularly the Presó tower, open to the public, and, at the highest point of the town, the Mola tower and the gate of the same name. Other interesting buildings include the Horno de Dalt, a refurbished medieval bakery open to the public, and several houses and stately homes. Not far from the historic town centre is En Segures, a spa dating back to the early 20th century.
Situated in the borough are Corbo castle and many chapels, including particularly those of Sant Cristòfol and Sant Roc, and three fortified farms.

Catí was an important town in the Middle Ages and the old town centre features several historic monuments in very good condition: the Gothic parish church and the town hall. Worthy of mention in the latter are the wool exchange and the paintings in the chapter house.
There are just three rock art sites in Catí, none open to the public, but elsewhere in the borough there are five chapels: Santa Anna (15th C.), and Sant Vicent, Sant Josep and Pilar (all 17th C.) and the chapel at Avellà spa (16th C.) with very interesting murals.
The borough also has plenty of extraordinary dry-stone walling and ice pits.

The town of Coves de Vinromà has eight rock shelters with cave paintings but only one open to the public (by appointment): Cova de la Saltadora.

Coves de Vinromà is situated on the Via Augusta. One indication of its extensive Romanisation is the Fontanelles Roman funeral relief. The historic town centre is well conserved and its highlights are the stations of the cross, the parish church, the Senyoretes house, the town hall, the Portalet and the old church now used as an exhibition hall.

Situated in the borough are the Sant Vicent chapel and a good many farms, watermills and traditional architecture featuring dry-stone walling.

The city of Morella played a crucial role in the history of the Crown of Aragón, and subsequently the history of Spain. The castle and walled city, in very good condition, are a first-rate tourist attraction in the province of Castellón. Morella has many monuments open to the public, particularly the castle, city walls, aqueduct, city hall,  presbytery church, Sant Francesc church and several medieval secular buildings scattered around the historic city centre.

The Valltorta-Gassulla Culture Park includes just a small part of the Morella borough, with no recorded rock art. It is however possible to visit Morella la Vella, a farm with large buildings dating back to the Carlist Wars and rock shelters of the same name discovered in 1917. The extraordinary petroglyphs in Dena del Moll, Freiximeno farm and around Sant Antoni de la Vespa also deserve a mention.

The borough of Morella also contains many farms, many still inhabited and some regarded as valuable heritage sites on account of their defense towers or very beautiful chapels. Morella also has sites of exceptional ethnological and palaeontological heritage as can be seen in the Dinosaur Age Museum in the former church of Sant Miquel, alongside the gate of the same name.

Tírig is the borough with the most rock shelters and caves with rock art open to the public. It has fifteen rock art sites including three open to the public: Cova dels Cavalls, Cova del Civil and Mas d'en Josep. All three are emblematic sites of prehistoric times on the Iberian peninsula, particularly the world-famous Cavalls and Civil caves.
Also worth visiting in this borough is Puig Roda Museum dedicated to this local, late-nineteenth-century artist whose oeuvre is first-rate and very interesting.

The borough has an extraordinary heritage of dry-stone walling, and outings along the Valltorta ravine reveal rugged landscapes full of wildlife.

Just a few plots of Vilar de Canes, the smallest village in the culture park, are actually in the park. It is not known to have any rock art but Segarra has a fortified farm that was used as military quarters during the Carlist Wars on account of its strategic location on the road from Albocàsser to Ares del Maestrat and Benassal.